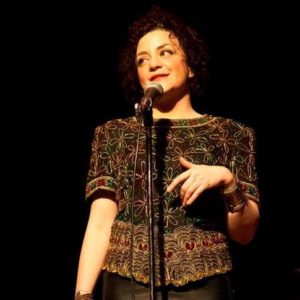 Jessica Holmes is the co-founder and OG creative driving force & master of ceremonies behind Story Story Night—Boise’s live storytelling phenomenon. She not only drove the creation of the flagship season, but also the Story Story Studio workshop arm, the

adults-only Story Story Late-Night season, the local-luminary-studded Starry Story Night special event, the mobile recording Story Story Booth, and the podcast. All while simultaneously running her own copywriting business. Now a senior copywriter for CLM Marketing & Advertising in Boise, she still puts words to work in standout ways that mean business. She’s an Idaho Business Review Accomplished Under 40 (2011), won the inaugural Boise’s Funniest Person stand-up comedy contest (2013), and was named the “Best Invitee To Your Next Cocktail Party” in Boise Weekly’s Best of Boise issue (2013). She’s been profiled (but not for criminal reasons) in both the Idaho Statesman and Boise Weekly. She posts about thrift store & vintage fashion, her cat, and other cheap-wad pursuits on her blog Cheep.